Cancer is one of the most common cause of death in the world. Actually, it’s the second leading cause of death. There are many types cancer. Some have 100 percent cure rate, that means with treatment the patient can survive the catastrophe. The prognosis mainly depends on upon the timing of detection of cancer. An early diagnosis is essential for the proper treatment. Lung cancer, mesothelioma, breast cancer, blood cancer are some common cancer. In Medicine, cancer is known as Neoplasm. That is what your doctor will use the name. The study of neoplasm is oncology. Sometimes it is also called a tumor. I will discuss the basic terminology and facts about cancer. Carcinoma or sarcoma are two different types of cancer.

By definition, neoplasia means “an abnormal mass of tissue the growth of which exceeds and is uncoordinated with that of the normal tissues and persists in the same excessive manner after the cessation of the stimuli which evoked the change.” from Robins Basic Pathology book. Cancer is a Genetic disorder. It is caused by Genetic mutations in the DNA acquired by spontaneously or environmental pollution.

Anaplasia: Lack of differentiation is called anaplasia. It is marked by several changes in the cell which are called the hallmark of malignant transformation.

Dysplasia: Refers to disorderly but non-neoplastic growth. That means it is not neoplasia yet but will soon transform into neoplasia. Here the rate of Mitosis is greater than hyperplasia but lesser than neoplasia.

Hyperplasia: It is a reversible growth due to excessive mitosis of the cell. Hyperplasia is an adaptive change in the tissue. It is called premalignant.

Difference between hyperplasia and Neoplasia: 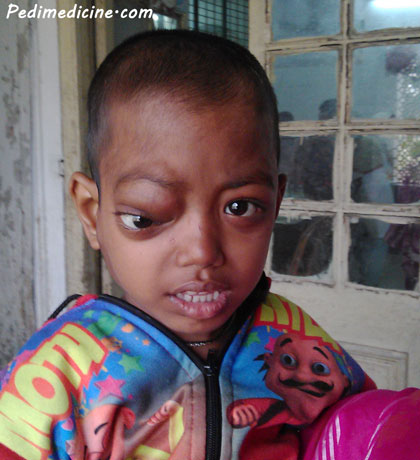 Neuroblastoma cancer of a child

Pleomorphism: It means variation in the size and shape of the neoplastic tissue.

Benign and malignant Tumor: A tumor is said to be benign when its microscopic and gross characteristics are considered to be relatively innocent, implying that it will remain localized, it cannot spread to other sites, and is amenable to local surgical removal; the patient generally survives. Sometimes they are responsible for a serious disease.

Malignant neoplasm implies that the lesion can invade and destroy adjacent structures and spread to distant sites (metasta­size) to cause death. Malignant neoplasm means a red flag. Sometimes only the malignant tumors are referred as cancers.

So you see, why Malignant tumor has a red flag.

Carcinoma: It is the malignant tumor of the epithelial tissue. For a nonmedical person: it is the outermost layer of any organ or tissue. As for example, lining epithelium of Lung is Squamous epithelium. but in malignant neoplasm of lung, it is changed to columnar epithelium. Most commonly due to smoking.

Difference between carcinoma and Sarcoma:

Carcinoma occurs in middle and old age usually after the age of 50 years. While, sarcoma is most common in the first and second decade of life. Carcinoma spreads to another organ by Lymph and Sarcoma by blood. Carcinoma is highly radiosensitive and sarcoma is chemosensitive. 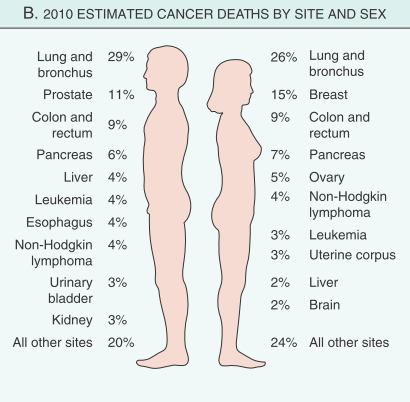 Common site of cancer in male and female

Preneoplastic/Premalignant/Precancerous: It is an intermediate abnormal neoplastic growth develops in altered cells and can be recognized clinically or microbiologically. Leucoplakia, some benign neoplasm are premalignant.

Paraneoplastic Syndrome: It includes the endocrine effect of a neoplasm. It may be benign or neoplasm but it does not metastasize. Rather it causes harm by secretion. As for example, in squamous cell carcinoma, a parathyroid hormone-related peptide is secreted and it causes hypercalcemia.

Staging of cancer: Staging is done on the basis of the size of the primary lesion, the extent of spread to regional lymph node and presence or absence of blood-borne metastasis. Simply remember TNM, tumor, node metastasis. Staging determines the severity of the lesion.

Grading of cancer: Grading is based on the degree of differentiation or number of mitosis within the tumor. It indicates the degree of malignancy or aggressiveness.

Ask your doctor about the staging and grading. Treatment is dependent on it.

Carcinogen: These are the agents which cause genetic damage and induces neoplastic proliferation. It may be chemicals, physical agents, or microbes such as various virus and bacteria.

Occupational Cancer: Cancer is a hazard of various occupation. For example, Asbestos is related to Lung cancer, Mesothelioma etc.

The character of Malignancy:

It is helpful for the medical students and Doctors. To summarize the above discussion the below chart is useful.

The first 4 of these below character are exclusive for Dysplasia.

Anaplasia is regarded as the first 8 character.

It has turned into a giant post. Thanks for reading. If you have any query, ask me in the comment. I will try to answer. Please share it with your friends. Thanks

Resources for Patients: We offer authoritative information about your type of cancer as well as information on a wide range of cancer topics and the latest cancer research. www.cancer.gov