Home »Lecture»Understanding Basics and How to Read Head CT Scan

CT Scan is one of the most widely used investigation procedures. It is easily available, cheap and can be performed rapidly in contrast to MRI. CT scan is a radiological procedure done by taking a series of cross-sectional images. One circle is taken at a time in a full circle rotation. A computer then calculates and converts the rate of absorption and density of Xrays into a picture on a screen.

Disadvantage: Radiation hazard is a major issue. Due to radiation, it can not be performed during early pregnancy. The soft tissue discrimination is poor.

The contrast Used in CT Scan

Contrasts are invariably used in the CT scans to enhance the findings. Although CT scan and MRI can provide valuable information about the anatomy and pathology of internal organs and tissues, greater details can be obtained by adding contrast. It may help visualize the pathology more clearly and indicate the nature of the lesion by the amount and distribution of contrast uptake. This is a useful add-on to the conventional CT scan and is used in about 50% cases. Iodine-based contrast agents such as lopamiro 300 are used with CT scans. It is given intravenously prior to scanning. Owing to the high atomic number of these agents, it can attenuate the X-ray beams and appear brighter or radio-opaque in the film. Blood containing this contrast agent flows through the vessels of the area to be scanned. In the film, the agent increases the contrast between blood and surrounding tissues. This facilitates visualization of the arteries, veins and ultimately the internal structures. Highly vascularized areas will become brighter in the film.

Hounsfield Units: CT was invented in 1972 by British Engineer, Sir Godfrey Newbold Hounsfield in Hayes, United Kingdom at EMI Central Research Laboratories using X-rays. Different tissues interact with X-rays in different ways. The extent to which a material can be penetrated by an x-ray is expressed as Hounsfield Units (HU). Distilled water at standard temperature and pressure has 0 HU, whereas air under the same conditions has -1000 HU and bone has 400 to1000 HU.

Window Level (WL) and Window Width (WW): Not easy to understand and also not needed for basic understandings. So I will escape this. Just know that, On CT examination of the chest, a WW of 300 to 350 and WL of 35 to 45 are chosen to image the mediastinum soft tissue window whereas WW of 1500 and WL of 0 is used to assess the lung window. It will be determined by the radiologist and technician.

How to Interpret CT Scan Head

First, confirm that you have the right film for the right patient. Check the patient’s name, CT scan data, and relevant information.

Blood Can Be Very Bad

This is a well-known mnemonic to use for assessing the CT film. This way, you wont miss any obvious pathology. If you find something pathological, don’t forget to check other area. 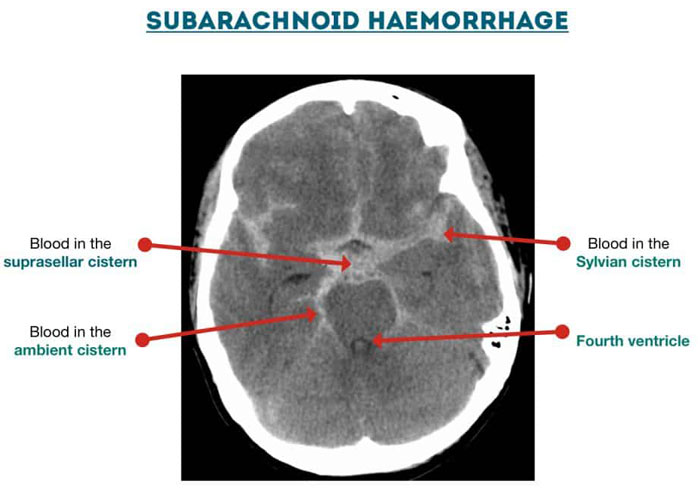 Extracerebral (axial) haemorrhage occurring within the skull, but outside the brain

Intracerebral (axial) haemorrhage occurring within the brain itself.

Cisterns are collections of CSF, which surround and protect the brain. Examine each for evidence of effacement, asymmetry and the presence of blood.

Cortical bone has the highest density on the CT scan (300–1000 HU) and is best viewed on separate bony windows when looking for evidence of fractures or tumors. Look for fractures of the calvarium and skull base. Subtle areas of low density within the inner table of the skull may represent small locals of air in the soft tissue windows. Careful evaluation to look for subtle fractures here is essential. Taking history is critical to identify fractures.