Home »Lecture»Understandings Basics and How To Read Chest Xray

Chest Xray is one of the most routinely performed investigations in medical and surgical practice. It’s vital to understand normal lung Xray. To differentiate abnormal findings, one has to know how to read a normal chest x-ray. The chest X-ray (CXR) is performed to evaluate the lungs, heart and chest wall. Normal CXR is taken with the patient in an upright position, taking a deep breath and holding it for a few seconds to reduce the possibility of a blurred image. Routine CXR is taken in a frontal view (referred to as posterior-anterior or PA). The other views which may be taken as required are:

In neonates, the films are always taken as AP views for better visualization of the lung fields and heart. 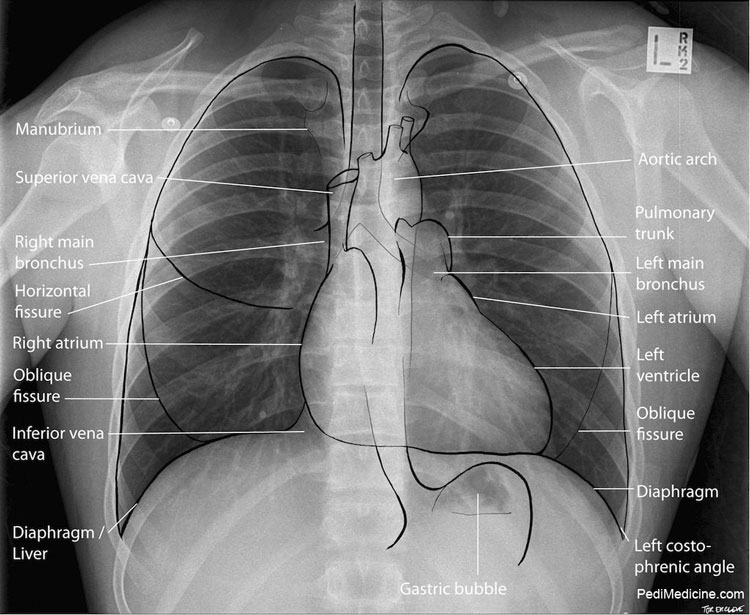 Interpretation of the film taken in expiration is difficult because the lung bases appear hazy and the heart looks enlarged. However, a pneumothorax is more clearly seen in an expiratory film rather than in the inspiratory film. In a CXR, carefully observe the following points. Always remember to assess the technical quality of the film, such as incorrect exposure or faulty centering or projection, which may either hide, mimic or confuse with the disease diagnosis.

Understanding Basics and How to Read Head CT Scan

On all Chest Xray Check the following:

Position of the Patient

Observe the medial ends of both clavicles in relation to the pedicles of the thoracic vertebrae. The medial end of the clavicle should be equidistant from the spinous process at the level of T4 and T5 thoracic vertebrae. If the position is not correct the heart may appear shifted in the radiograph. Also, the scapular shadow may be seen.

Side of the Xray

Always look at the top of the film for the “R” or “L” markers which indicate the patient’s position (right or left). Dextrocardia or situs inversus may be missed if the correct position is not noted at the beginning.

Diaphragm—usually the right dome is 2.5 cm above the left dome.

Fundal gas is on the left side.

Heart—normally one-third lies on the right side and two-third on the left. Look at the cardiac apex, which is on the left side.

Soft Tissue Shadow (Outside Skeleton) – This appears as opacity outside the bony skeleton. In females, check for breast shadow (may be absent due to mastectomy)

Look for the cervical rib, maybe small or rudimentary (missed in many cases).

Check the clavicle, spine and vertebral column, scapula and humerus.

The position of Trachea

Left dome is 2.5 cm below the right dome.

Costophrenic and Cardiophrenic Angles on Both Sides.

The angle between the diaphragm and the rib is Called the costophrenic angle (maybe obliterated due to pleural effusion).

Angle between the diaphragm and the cardiac border is called the cardiophrenic angle.

The heart may be enlarged in transverse diameter. occasionally, enlargement may be of either the left ventricular (LV Type) or the right ventricular type (RV Type)

In LV type enlargement, the apex is displaced downwards and to the left. cardiophrenic angle is obtuse and merges with the diaphragm.

In RV type enlargement, apex is round and elevated above the diaphragm.

In right atrial enlargement, there is an increased curvature in the right border of the heart.

There may be calcification of valves (better seen in a lateral or oblique view). In a PA view, it is obscured by the spine. Calcification is best detected by echocardiography.

Outline of the Mediastinum

Look for any widening of the superior mediastinal shadow (maybe due to lymphoma, retrosternal goiter, aneurysm of the aorta, etc).

Borders of the Heart

The right border of the heart is formed by (above down-wards) the following:

The left border of the heart is formed by (above wards) the following:

The hilar shadow consists of:

Lung Fields and Fissures of Lung

Radiologically, lung fields arc divided into three zones, all of which are seen in the PA view. The radiological zone does not usually correspond with the lobe of the lung. To see the lobe, a lateral film should always be taken.

The upper zone is the part above a horizontal line through the lower border of the anterior end of the second rib.

The lower zone is the part below the mid-zone.

Fissures can be seen only if they lie tangential to the X-ray beam. These are composed of two layers of pleura. Usually, only horizontal fissure (minor fissure) is visible in the frontal projection, running from right hilum to the sixth rib in the axilla. No equivalent of the horizontal fissure. sometimes from a PA view, the lobe can be localized in some cases. For example, if a horizontal fissure is seen (on the right side), then the part above this fissure is the upper lobe.

Presentation of a Normal Chest Xray

This is the chest Xray PA view showing

Thanks, everyone. I hope it helps.

Download This page as PDF and save for later.