What does SMA mean?

For Parents, When to suspect a floppy infant?

Spinal Muscular Atrophies Spinal muscular atrophies (SN/lAs) are degenerative diseases of motor neurons that begin in fetal life and continue to be progressive in infancy and childhood. The progressive denervation of muscle is compensated for in part by reinnervation from an adjacent motor unit, but giant motor units are thus created with subsequent atrophy of muscle fibres when the reinnervating motor neuron eventually becomes involved. Motor neurons of cranial nerves III. IV, and VI to extraocular muscles as well as those of the sacral spinal cord innervating striated muscle of the urethral and anal sphincters are selectively spared. Upper motor neurons (layer 5 pyramidal neurons in the cerebral cortex) also remain normal.

Deletion or mutation of the SMN I gene reduces intracellular survival motor neuron protein levels causes spinal muscular atrophy, most likely by interfering with spliceosome assembly. A range of clinical severity and corresponding survival motor neuron levels is seen because of the presence of copies of the transcriptionally inefficient SMN2 gene and possibly other modifying genes. 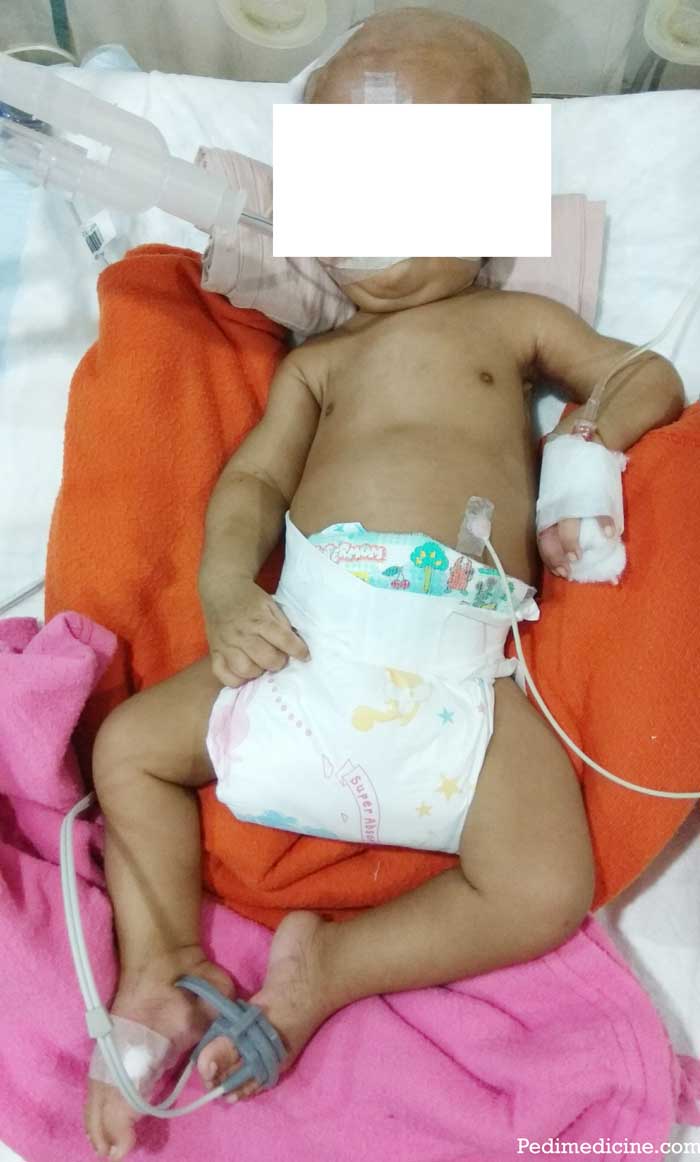 Investigations and Diagnosis of SMA

2. Creatine kinase- normal in type 1 and normal or slightly raised in SMA type 2 or 3

3. EMG studies: useful in differentiating the SMAs from other neurogenic and myopathic diseases.

4. Compound motor action potentials (CMAPs): are low normal or reduced, depending on the severity of disease

5. Muscle biopsy: necessary to differentiate SMAs from other neuromuscular diseases Degeneration and loss of spinal motor neurons with the neurogenic pattern of muscle morphology. Occasional neuronal chromatolysis with loss of myelinated axons in both anterior and posterior roots.

Prenatal diagnosis: Available when the proband is known to have aDNA abnormality.

No medical treatment is able to delay the progression. Supportive therapy includes orthopaedic care with particular attention to scoliosis and joint contractures, mild physiotherapy, and mechanical aids for assisting the child to eat and to be as functionally independent as possible. Most children learn to use a computer keyboard with great skill but cannot use a pencil easily. Valproic acid is sometimes administered, gabapentin and oral phenylbutyrate also may slow the progression, but these treatments do not alter the course in all patients. A benefit of antioxidants is unproven. Gene replacement and protein replacement therapies remain theoretical and experimental.

Spinraza is The first and only FDA-approved treatment for children and adults with spinal muscular atrophy (SMA). It’s not available in Bangladesh. Its a registered product of Biogen.

How Spiraza Works? We have 2 sets of genes SMN1 and SMN2 which are responsible for the production of SMN protein. In SMA, SMN1 is lost but SMN2 can produce some protein. Although these protein made by SMN2 are shorter and gets destroyed by the cells. Spinraza helps this SMN2 gene to produce better SMN protein.

Master X, a 3 Month old Bangladeshi boy, 2nd issue of consanguineous (1st degree) parents, admitted through ER with the complaints of a cough for 2 days, reluctant to feed since morning and breathing difficulty since evening. According to the informant mother, he child was reasonably well 2 days back. Then he developed a cough that was dry, non-productive initially, not associated with breathing difficulty but since evening, his cough was associated with breathing difficulty that was severe enough to interfere his feeding & daily activities. He also developed excessive salivation since morning. Mother also noticed that her child developed less movement in all 4 limbs for last 1 month. There was no H/O rash, runny nose, convulsion, bladder or bowel abnormalities and admitted to DMCH for better management. His other sibling died at 5 months of age due to spinal muscular atrophy (SMA). He was born by LUCS at term having average birth weight without any perinatal complications. He is on immunization & on breast feeding.

Other system examinations revealed no abnormality.

The child was growing well until 8 months of age. Then he ceased to grow in comparison with his peers. Mother also complained of poor movement of all limbs for the same duration. Ile learned to sit on his own at 11 months of age but could not stand or walk any further. His chest got deformed gradually over 3 years.

He suffered from recurrent attacks of a cough and respiratory distress since 18 months of age and used to improve with salbutamol syrup, His parents were not consanguineous. His elder sister of 13 years was keeping well. His younger brother of 18 months also developed some of his features. His father was a small trader and mother housewife.

On Examination -He looked unusually happy. Vital signs were stable. He was anaemic. waste and emotionally labile. He had pectuscarinatum, left-sided scoliosis with slight kyphosis. He had generalized hypotonia (grade-1) stayed in frog leg position when kept supine, slipped down when taken by armpit. Wt 7.5 kg, <3″‘ centile, length 68.cm (<3rd centile). WLZ < median. OFC 50 cm, <50th centile. He was conscious and Oriented to the surroundings but had a low voice. Cranial nerves were intact. Ile had constant fibrillation of the tongue, muscle bulk and tone reduced, deep reflexes of upper limbs reduced and those of lower limbs absent Sensory functions. were intact. Heart and lungs- were normal with no organomegaly.

Thanks. Thats all for now. Comment here for further information.